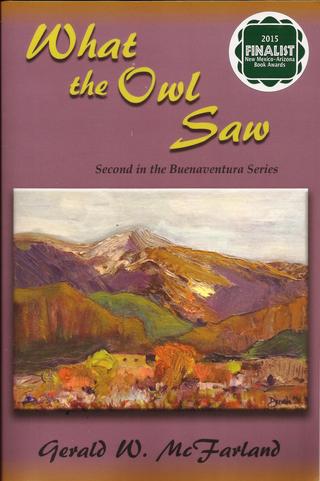 Residents of the Santa Fe area are urged to purchase What the Owl Saw through the Collected Works Bookstore and Coffeehouse, 202 Galisteo Street, Santa Fe (505) 988-4226.

Regardless of your geographical location, support your local independent bookstores by ordering and buying through them.

What the Owl Saw

KIRKUS REVIEWS said WHAT THE OWL SAW is "a lavishly detailed...look at the mystical underside of a vanished Santa Fe world."

Set in early eighteenth-century Santa Fe, New Mexico, WHAT THE OWL SAW has as its central character Don Carlos Buenaventura, a powerful brujo early in his sixth life. For his safety in this conservative Catholic society he must hide his brujo identity and present himself to his neighbors as Don Alfonso Cabeza de Vaca, a respectable upper-class government official and ostensibly a conventional Catholic. But in secret he continues to practice his paranormal powers, which include an ability to speak with animals and to transform himself into hawks and owls. Throughout his previous lives as a brujo, he led an essentially solitary existence; now, living in a community and establishing relationships with a few close friends, he becomes aware that his training in the Brujo's Way is incomplete, and he seeks ways to deepen his understanding of being in the world.

Through relationships with a young Pueblo Indian, Jose Lugo, and with an old Tewa Indian medicine man named Xenome, Don Carlos delves into the Pueblo people's spiritual world. While accompanying Jose on the young seeker's vision quest, he shares with Jose peyote-enhanced visions of kachinas, and he himself is personally addressed by Toho, the mountain lion kachina. Xenome and Don Carlos also converse about many topics, including the differences between Don Carlos's method of transformations and the transformations achieved by Indian shamans and witches.

More dangerous for Don Carlos is a friendship with three entertainers, a magician and two seductive dancers, recent arrivals in Santa Fe. They seem to have access to esoteric levels of consciousness, but he suspects that they may be agents of Don Malvolio, an evil sorcerer and Carlos's enemy through many lifetimes. Only in the closing chapters is the truth about the threesome revealed, as Don Carlos, his beloved Inez, and Jose set out on a desperate quest to rescue four children who have been kidnapped by an apprentice of Don Malvolio's. In the course of rescuing the children Don Carlos, while making a long flight in owl form, sees difficult truths about himself, about the nature of his relationships with women, especially Inez, and about what he must do next in his pursuit of the path of knowledge he calls the Unknown Way.