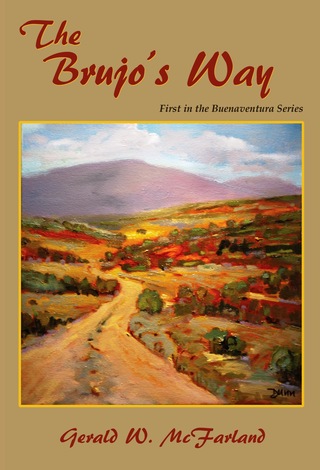 First in the Buenaventura Series. ISBN: 978-0-86534-944-5. Retail price: 26.95. 310pp. Sunstone Press.
Collected Works Bookstore
Residents of the Santa Fe area are urged to purchase The Brujo's Way from the Collected Works Bookstore and Coffeehouse, 202 Galisteo Street, Santa Fe (505) 988-4226, where a number of copies are available at a steeply discounted price.

Regardless of your geographical location, support your local independent bookstores by ordering and buying through them.

Don Carlos Buenaventura, a powerful brujo in his sixth life, practices a benign form of sorcery based on his motto "Do no harm." His great powers derive from intensive training in heightened awareness akin to Eastern yogic disciplines rather than from incantations, spells, or aid from demon allies. He is accidentally born in 1684 into an aristocratic Catholic family in Mexico City, a social and religious milieu in which his identity as a brujo, if known, would put him in mortal danger. In repressing any sign that he is other than an ordinary young man, he forgets both his brujo powers and who he really is.

Exiled at nineteen to the remote frontier town of Santa Fe, New Mexico, he is exposed during the journey northward to wild desert landscapes that awaken his forgotten powers. In Santa Fe he resumes his conventional persona to protect what he now recognizes is his true identity and is caught in the tension of trying to live two lives. An arduous return trip to Mexico City and back further intensifies his brujo powers, leading to many adventures, including dangerous encounters with an evil sorcerer, an Apache war party, and a woman devotee of an ancient Aztec goddess, and also stimulates his recall, in dreams, of his brujo training in past lives. A chance meeting in Mexico City with a woman trained in Tantric spirituality is life-changing, opening him to other dimensions of consciousness. Returning to Santa Fe, he faces the task of learning to unite his Brujo's Way with his new spiritual path.