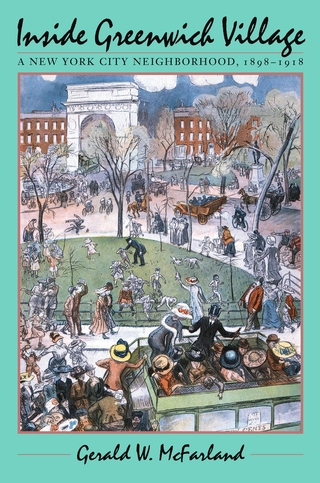 In the popular imagination, New York City's Greenwich Village is primarily known as a center of bohemianism, home to avant-garde artists, political radicals, and other nonconformists who challenged the reigning orthodoxies of their time. But in the decades before World War I, even as the Village was gaining its reputation as America's Left Bank, it was important in another way as Manhattan's most mixed-race, multiethnic district, reflecting in microcosm the complex challenges Americans faced as the United States became a modern, urban society.

INSIDE GREENWHICH VILLAGE reconstructs this world with vivid descriptions of the major groups that resided within its boundaries–the Italian immigrants and African Americans to the south, the Irish Americans to the west, the well-to-do Protestants to the north, and the New York University students, middle-class professionals, and artists and writers who lived in apartment buildings and boarding houses on or near Washington Square.

From NEW YORK HISTORY: "Creatively researched and beautifully crafted.... Reading McFarland's accessible prose is like being in the company of an assured and articulate tour guide as at home in Washington Square salons as he is familiar with cardboard-box factories and settlement houses."