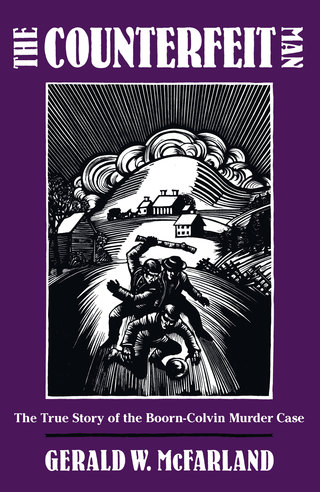 The "Counterfeit" Man: The True Story of the Boorn-Colvin Murder Case

EE MY NOVEMBER 16, 2016 BLOG ENTRY FOR MY THOUGHTS ON THE TWENTY-FIFTH ANNIVERSARY OF THIS BOOK'S PUBLICATION.

When Russell Colvin disappeared from Manchester, Vermont in 1812, no one in town showed much concern. He was a man of little wit, and he tended to wander. But in 1819, some of his neighbors had dreams about him, and rumors began to circulate about ghost sightings. Colvin's brothers-in-law, Stephen and Jesse Boorn, were now suspected of having killed him. The Boorn brothers, jailed and interrogated separately, produced contradictory confessions which they promptly repudiated, but nevertheless a jury convicted them of murder. Then a man claiming to be Colvin was located in New Jersey, returned to Manchester, and the Boorn brothers were set free.

But is it possible that the returned Colvin was an impostor? McFarland's reexamination of the evidence in this fascinating true-crime case challenges the reader to figure out the answer to that question. And what was it about social relations in Manchester that led townspeople to interpret the facts of the case so differently–some believing that the Boorn brothers were innocent and other convinced that they were murderers?

NEW YORK TIMES (SUNDAY) BOOK REVIEW: "McFarland states in his preface that one of his purposes in writing this book was to use the Boorn-Colvin case as a means of 'studying a community and the social tensions that afflicted it at a given time.' This he has done, and done splendidly."