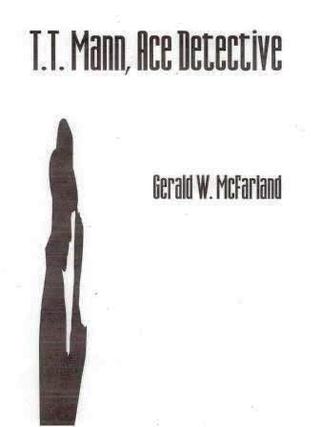 T.T. Mann, Ace Detective combines a large element of fantasy (T.T., after all, is 6' tall but weighs only 22 lbs) with a historically accurate portrait of San Francisco in 1955. One reader told me that I had provided him with a prose map to the city in the mid-fifties, a comment that pleased me immensely because I had worked hard to make the geographical and social background features of the book as true to the era as possible. The "inside story" of why that goal was particularly important to me is that the Bay Area in the 1950s was the land of my youth, my high-school and college years. The text of T.T. Mann takes its readers on a tour of many San Francisco neighborhoods ranging from elite districts such as St. Francis Wood to the slums of the Tenderloin. Of other districts that are mentioned, I remember with particular fondness North Beach, famous for its bohemian ambiance. It was while on an expedition with high-school friends to a North Beach Italian restaurant in 1955 that I first became aware of the mind-expanding possibilities offered by Lawrence Ferlinghetti's City Lights Bookstore. Lombard Street on Russian Hill, a winding one-block-long street with eight sharp turns, is a tourist site, but its crooked contours seemed to me the perfect setting for the residence of Biggie Fingers, the city's top crime boss. Then there are the restaurants that come up here and there. Tarantino's on Fisherman's Wharf was a favorite of my mother's, while my father, who worked in the city and made the round-trip commute every weekday from our East Bay home to San Francisco and back, particularly liked Bernstein's Fish Grotto on Powell Street, which has long since gone out of business; but my brother and I both had vivid memories of outings there with Dad. The fine stores around Union Square, more elegant then than now, were favored destinations for window shopping that my wife and editor, Dorothy, visited with her high-school girlfriends. These are only a few examples of the territory lovingly reconstructed in the novel. So please get your hands on the book and let me take you on a tour of the city.

Great memories indeed. Our favorite family restaurant was the New Pisa in North Beach; another was the Tadich Grill near lower Market St.