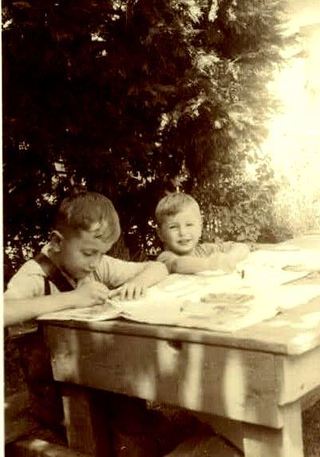 Dick and Jerry McFarland about the time their dad told them the story on which "T.T. Mann, Ace Detective" was based.

2018 has been a banner year. After a year-and-a-half in the making, "T.T. Mann, Ace Detective" was published by Levellers Press of Amherst and Florence, Massachusetts. Great job by Matt and Faith of Levellers!

I've already explained that T.T. Mann's bizarre physique--6' tall and weighing only 22 lbs.--came directly from the way our father told the story to my brother Dick and me. We were young and never questioned our father's description of the lead character.

But in the course of building a story around T.T. Mann's exploits, I tried to place T.T. in a realistic setting: San Francisco in the 1950s. I was aided by my wife Dorothy who, like me, was a high school and college student living in the Bay Area in that decade.

Throughout 2018 I experimented with using social media, mainly Twitter, to publicize my book. Did it pay off? I won't know for certain until I get a complete sales summary early next year. No matter what, I had fun venturing into a media environment that was new to me.

Much earlier (the October 10th posting) I promised to point out a similarity between the way Dona Leon often concludes Guido Brunetti's cases and the way I chose to wrap-up the three cases T.T. pursued in this book. The similarity is this: All three of T.T.'s cases end without the villains being jailed. For example, in "Blondes Are Trouble," crime boss Biggie Fingers gets back the list of city officials he bribes without any of the bad guys being fined, fired, or sent to jail. The targets of Brunetti's investigations also usually get away despite their misdeeds. No easy resolutions! No simple conclusions in which crime does not pay.

Thank you so much. Great Tips!

If you need more tips of making a great story, i have some refferences of it.
Check this out:
Click Here